Enter a bizarre and twisted game show where you and your friends must battle your way through several zombie-filled levels while cheered on by a blood-hungry audience in this 80s retro world of post-apocalyptic mayhem.

So You Wanna be a Champion?

Why is this happening? You now live in a post-apocalyptic world where what’s left of humanity has fortified itself in survivor colonies and for some reason battling zombies on live television is everyone’s idea of fun.

It’s crazy. It’s bizarre. And you might get a sense that the audience actually wants you to fail. But if you win, you’ll get all the fame and fortune you could have ever wished for. Lose and join the infected hordes — don’t say we didn’t warn you! 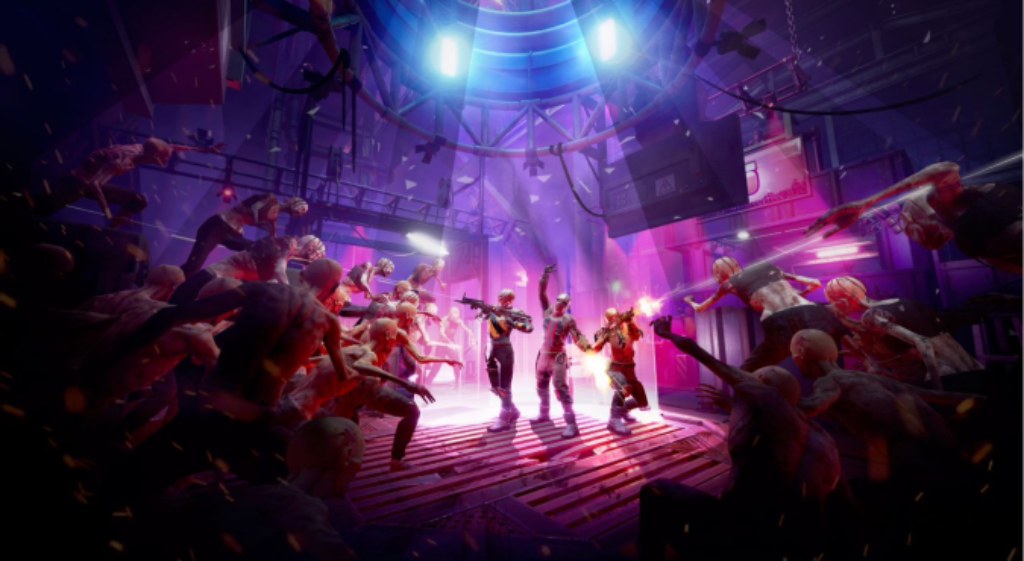 After you suit up, you and your friends will face multiple levels filled with unique deadly challenges and lethal hazards.

Starting off in an underground bunker, you’ll gradually rise through different arenas as you take on increasingly menacing zombie waves.

Stack up your points while you pop zombie brains and fight it out for leaderboard dominance. But don’t forget to cooperate with team members if you want to stay alive!

Make contact with us and we’ll help you organise your next raiding party or team building activity. It doesn’t matter if you’re young or old, pro-gamer or greenhorn, we want to hear from you.

We use cookies on our website to give you the most relevant experience by remembering your preferences and repeat visits. By clicking “Accept”, you consent to the use of ALL the cookies.
Cookie settingsACCEPT
Manage consent

This website uses cookies to improve your experience while you navigate through the website. Out of these, the cookies that are categorized as necessary are stored on your browser as they are essential for the working of basic functionalities of the website. We also use third-party cookies that help us analyze and understand how you use this website. These cookies will be stored in your browser only with your consent. You also have the option to opt-out of these cookies. But opting out of some of these cookies may affect your browsing experience.
Necessary Always Enabled
Necessary cookies are absolutely essential for the website to function properly. This category only includes cookies that ensures basic functionalities and security features of the website. These cookies do not store any personal information.
Non-necessary
Any cookies that may not be particularly necessary for the website to function and is used specifically to collect user personal data via analytics, ads, other embedded contents are termed as non-necessary cookies. It is mandatory to procure user consent prior to running these cookies on your website.
SAVE & ACCEPT